Jon-David started his Broadcasting career at age 15, as the sign-off announcer at K-131; the proverbial “five-kilowatt daytimer” in Barstow, California. In the subsequent 45 years, he has traveled America building the kind of knowledge and experience base a professional news/talk show host simply must have.

Now the USA Radio Network’s newest Broadcast, “The Wells Report” brings Truth and Solutions from a Constitutional Conservative perspective. “I want my fellow citizens to know that whenever they hear this broadcast, their time won’t be wasted.” “Our Government has squandered the faith and trust of the American People.” “It’s time politicians of both parties wise up and remember they work for us, not the other way around.”

Wells went on to say; “The Broadcast may have my name on it, but this is our show.. Just like this Nation, The Wells Report belongs to us; We the People.”

J-D’s hobbies include all forms of Motorsports (he’s a pathetic motorhead), Sailboat Racing, and Coaching Baseball. He is also an avid Rifle and Pistol Shooter, and a really lousy Musician. He is also a drummer, (Which, he’s been told is actually different than being a musician.) and plays 5-String Bbanjo. (.No one knows why.)

Jon-David, and wife SusanAnn have just celebrated their twenty-second wedding anniversary, and are the proud parents of Colton Joseph.

Jon-David spends his weekends as Master Sergeant John D. Wells of the Texas State Guard. “The Civil Affairs mission of the Guard, which includes providing disaster relief for his Texas Neighbors, was a perfect fit for what we do on The Wells Report” J-D said. “This was the best way I could find to give back to the Texans who have listened, and have given the Wells Family so much.” 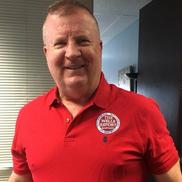 On July 17, 1962, the Plano Republican Women’s Club (PRWC) was organized to work for the election of Republican candidates at the local, state, and national levels.  At that time, there were no Republican elected officials in Collin County and no Republican women’s clubs.

During the next two decades PRWC’s efforts at building the Republican Party and working for Republican candidates were important in achieving today’s Republican majority in Collin County.

In 2002, PRWC changed its name to “Plano Republican Women” and celebrated its 40th anniversary, continuing its tradition as an active, vibrant organization of capable women who offer time, talent, money, and leadership toward the election efforts of Republican candidates at the local, state, and national levels.

Jon-David Wells of The Wells Report

Since July 17, 1962 when the club for Plano Republican Women was founded, we have been working to advance conservative  principles and candidates in Plano, Collin County, the State of Texas and ​Washington D.C.

Our daytime luncheon meeting is planned to make good use of time so members may stay up-to-date on issues in this community and in our country.

We invite you to join Plano Republican Women.

Please come to a meeting for membership forms and answers to any questions you may have about membership.

​​PRW meets on the 3rd Tuesday of every month (except June, July and December)

Lunch is available  for $25.00 with RSVP, cash or check (preferred) payable to PRW on arrival
RSVPs for lunch must be made by 5 pm Friday, August 12, 2022
​​
We welcome guests and visitors to our General Meeting. Members, please bring a friend!

To RSVP send an email to:
​​rsvp@planorepublicanwomen.org
Include your name in your email and specify whether you will/will not be having lunch